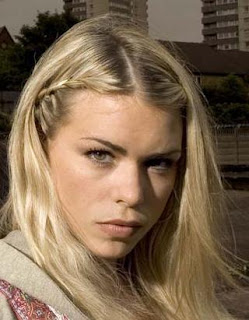 Tonight ends the David Tennant run as Doctor Who. The second episode of The End of Time has already aired in the United Kingdom, but BBC America will air that episode this evening in the U.S. In honor of David Tennant and the magnificent women who served as his companion, we have an extra long Saturday Smackdown for you this week. Up for your choice, this week is which companion is your favorite: Rose Tyler, Martha Jones or Donna Noble?

Rose Tyler played by Billie Piper is introduced in the revived series as the ninth Doctor’s (Christopher Eccleston). Rose is a working class girl who has a job as a London shop girl. She lives with her mother Jackie and her sometime boyfriend is Mickey Smith (no relationship to Sarah Jane). Rose’s enthusiastic embrace of the Doctor’s lifestyle leads her to fall in love with him. While the series typically refrained from showing the romantic relationships between the Doctor and his companions, Rose works her way under the Doctor’s jaded skin, giving him a new lease of life.

When Rose absorbs the power of the Tardis at the end of the first series to defeat the Daleks and restore Jack Harkness to life, the Doctor must absorb it from her to save her life. The act kills him and he must regenerate. Thrown by the regeneration, Rose sticks with the Doctor, taking him home to her mother’s to care for him. The Doctor recovers, slowly and helps find off the Sycorax invasion during the Christmas special. Throughout the second series, Rose and the Doctor become very dependent on each other.

Rose and the Doctor meet Queen Victoria during a sojourn in the 1800s where they defeat a werewolf attack. Rose is knighted by the Queen as Dame Rose of the Powell Estate and subsequently banished along with the Doctor by the Queen. Victoria then orders the founding of the Torchwood Institute to deal with alien threats (including the Doctor).

Mickey joins Rose and the Doctor for a series of adventures including a visit to an alternate Earth where Rose’s father is still alive. The Cybermen attack brings Mickey into his own as he finds something to fight for. When Rose and the Doctor leave, Mickey remains behind. Rose meets Sarah Jane Smith during one adventure and experiences jealousy for the deep affection that is obvious between the Doctor and his former companion.

Towards the end of the second series, Torchwood Institute opens a portal between realities allowing the Cybermen and the Daleks to invade. In an all out war, the Doctor and Rose fight to defeat them, eventually devising a plan to suck them into the emptiness between universes. Mickey and Rose’s father from the alternate come through to help.

As the Cybermen and Daleks are being swept away, Rose is pulled towards the void and saved by her father’s teleporting device. The barrier between universes is sealed, leaving Rose trapped in the parallel universe – separated from the Doctor forever. The Doctor uses the power of a dying star to send her a message and say goodbye. Rose finally admits her love and although he wants to say it – the Doctor cannot.

Throughout the fourth series, Rose appears repeatedly to Donna Noble. The Doctor isn’t certain why, but when the Earth is stolen by Davros along with several other worlds. The Doctor and Rose are reunited along with many other companions including Sarah Jane, Jack Harkness, Donna Noble and Martha. Rose and the Doctor are delirious to be together again, but when the worlds are restored, Rose is sent back to her own universe along with his part-human alternate self – a mortal who will age alongside Rose. The bittersweet ending allows the Doctor to give Rose a sense of happily ever after though he is left alone.

Freema Ageyman delivered a pivotal and stunning turn as Dr. Martha Jones during the third season of England’s seminal series Dr. Who. When the series relaunched, it was the first time I really got into Dr. Who. I liked Rose Tyler; she was a spunky kid who fell in love with the Doctor. Her exile to an alternate reality devastated both the Doctor and Rose.

The Doctor spent time with Donna Noble during the Christmas special: The Runaway Bride. At the beginning of the third season, he encountered Dr. Martha Jones on the street, a moment that would be pivotal later in the episode after the hospital she worked in was taken to the moon so the aliens could search it for a missing lawbreaker. Martha reacted with calm, intellectual reasoning and action. She was neither headstrong nor uneducated, in fact, it was her very education, and her nose to the grindstone determination and her need to prove herself that ultimately lead her to take a chance on traveling with the doctor in the first place.

Martha Jones defied the Rose Tyler model because she was a well-educated, self-possessed woman who did not need the Doctor for vindication, despite her obvious excitement and thrill at exploring the universe. I did not realize it at the time, but Martha was also the first black companion of the Doctor.

What made her unique in that particular capacity is that she was not ‘stereotyped’ or ‘caricatured’ in any way. In fact, she played only one type: Martha Jones.

While Rose and Donna followed the Doctor with blind devotion, Martha never seemed to act with blinders on. She loved the Doctor, but she was not in love with him. She was also not blind to his flaws or to his innate weaknesses.

In Human Nature and Family of Blood, the Doctor must hide by burying his personality in a watch. He trusts Martha to look after his human teacher at a young men’s school (think Eton). The class difference is played up when Martha works as a maidservant at the school and the Doctor is John Smith, a teacher. As John Smith, the Doctor falls in love, frustrating Martha with his choices because it makes it harder for her to protect him. When his memories are restored, he begs the governess he has come to love to come with them, but he is the Doctor once more and no longer subject to his emotions. Martha sympathizes, but she is very practical in her assessment.

It’s the End of the World

The last three episodes of the third season delivered a powerful piece of storytelling. Jack Harkness is reunited with the Doctor and meets Martha Jones for the first time. The trio travel forwards to the end of time where they meet a kindly old engineer who is working diligently to save what remains of the human race.

He turns out to be the Master. He steals the Tardis, leaving the Doctor, Martha and Jack trapped at the end of time. They use Jack’s watch to skip backwards in time learning that the voice of the Prime Minister, heard all season, is in fact the Master who has been trapped by the Doctor sabotaging the Tardis. In a showdown with the Master, the Doctor loses and Jack is captured, leaving only Martha to escape. An invasion devastates the Earth, leaving most of the world in ruins. Martha Jones travels, alone across the entire globe telling stories of the Doctor.

She relies on herself and a network of underground aid to survive. Her absolute faith in the Doctor inspires the belief of a world that focuses that belief and helps the Doctor restore himself. The Doctor, Jack and Martha are then able to undo the invasion, turning back the world’s clock by a year, restoring everyone and everything — the only ones who remember are Martha, her family, the Doctor and Jack.

In the end, Martha chooses to leave the Doctor, because she learned during her journey that she was needed on Earth. That she could do so much more for her home and her people by staying rather than traipsing around the universe.

U.N.I.T. Torchwood and Beyond

Martha begins working for UNIT, reuniting with Jack Harkness for three episodes on Torchwood and later with the Doctor during the 4th season. She comes to his aid along with all his companions when the Daleks threaten to destroy the multiverse. In the most recent Torchwood mini-series, fans learn that Martha Jones is married — most likely, to the young doctor she fell in love with during her yearlong odyssey to save the world.

Catherine Tate’s first appearance in the series was during the Christmas Special in 2006: The Runaway Bride. Donna Noble appeared onboard the Tardis in her wedding dress. Her reaction is hilarious. She accuses the Doctor of being a Martian, of kidnapping her and of conspiring with some girl as a prank on her wedding day. Donna’s arrival is due to being dosed with Huon particles by her fiancé in an effort to help free the Racnoss from the center of the Earth.

Donna is appalled by the Doctor’s genocide when the Racnoss Queen will not back off. Though she eventually reconciles herself to the idea of the Doctor, she refuses his invitation to travel with him. A decision she eventually regrets.

Reunited with the Doctor

At the beginning of the fourth series, we learn that Donna’s turned her life around and found true purpose. She is investigating supernatural, paranormal and alien activity in an effort to try and find the Doctor again. During her investigation of the Adipose Industries, she and the Doctor make eye contact across a room and the connection is formed. Together they help free the Adipose children and save the planet. Donna eventually joins the Doctor aboard the Tardis.

Unlike her predecessors, Donna has no romantic aspirations where the Doctor is concerned. She and the Doctor become true friends, sharing experiences and learning to see the universe through each other’s eyes. The Doctor saves a family at Pompeii at Donna’s behest. Throughout her adventures, Donna continues to grow as a person, expanding her worldview and keeping the Doctor grounded.

Donna helps the Doctor fend off several invasions including one by the Shadow Proclamation, the Daleks and the Sontarans. She meets both Rose and Martha. During the series finale of the fourth season, Donna becomes trapped in the Tardis as it is near destruction. The Doctor’s hand (lost during the 2006 Christmas special) releases more regeneration energy – combining with Donna’s human DNA and alters her.

She becomes the Doctor-Donna and shares the Doctor’s memories and even some of his personality traits. She figures out how to use the Tardis and helps rescue the Doctor and his companions as well as the planets of the multiverse that have been stolen. Nevertheless, in the end, the Doctor must wipe her memories and take away all that she has become because she cannot survive as the Doctor-Donna. Just as Rose would have been consumed by the Tardis energies, so Donna would be destroyed by the mind of a Time Lord and the Doctor must make a horrible choice.

In a heart wrenching scene, the Doctor returns Donna Noble to the life she had before The Runaway Bride, a woman preoccupied with the inconsequential minutiae of life. He tells her mother and her grandfather to look after her and to never forget what a magnificent person she really is. The Doctor leaves, once again, alone.

These three magnificent women are indefatigable and fabulous in their own right. Choose your favorite companion and thoughts on the last five years with David Tennant’s Doctor. One commentator will win a $10 gift certificate to Amazon!

Which Companion do you choose to win this week’s Saturday Smackdown?

We use cookies to ensure that we give you the best experience on our website. If you continue to use this site we will assume that you are happy with it.OkRead more