#NewRelease Under a Mating Moon by Celia Breslin #BlackHillsWolves @DecadentPub 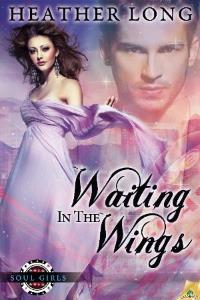 Who can blame Richard for his half-century-long bad mood? For fifty years he’s been waiting for his bride to get over the spat that sent her storming away from the safety of his territory. For fifty years, he’s missed everything about her—even her whimsical challenges to his authority.

It’s time for her to come home, but when he gets a lead on her whereabouts, he’s stunned. She’s dancing in a glitzy, gaudy Las Vegas show. And her memory of him has been wiped clean.

Kiki finally has the opportunity to headline at the Arcana Royale, but she’s not sure she’s happy about it. Especially when a dark, handsome stranger arouses forbidden passions from deep inside of the fog of her lost past.

Richard has been granted only three days in hostile territory to free his Kiki from the curse binding her mind.

Only one problem. When Kiki remembers Richard, she may not forgive him, but if she never remembers, she’ll never be free.

Warning: Contains an arrogant-as-hell vampire prince who will stop at nothing to get the girl he loves, an unpredictable showgirl who loves to party, and scorching sex that drives them both wild.

Richard rebounded to his feet. The sluggish beat of his heart surged double time. Adrenaline flooded his body, and his blood caught fire. By all that’s holy, I’ve missed her. Fifty years of separation vanished in a single blow. Her eyes glittered with suppressed passion. The potent scent of her filled his nostrils. The teasing lick of her throat was just a bare sample, and he wanted more.

On borrowed time, he’d called to her the moment he set foot inside the casino. Her blood sang to him—his blood running through her veins—his lover, his wife.

He slid a hand around the back of her neck and pulled her to him. Defiance shone in her expression, but he easily caught her hand before the next blow landed. Shackling her wrist, he brought her fist to his lips and kissed the knuckles. Her lips parted, and she exhaled a startled little sigh.

“No one calls me that.” Her chin came up, curiosity warring with the rebellion in her gaze. His Kristina was a creature of impulse, a delightful assault on all proper etiquette and expected behavior. She loved to laugh, dance, drink and surrounded herself with others as carefree as herself. Her wicked sense of humor and unabashed wonder at the world filled his dark and lonely nights with welcome distraction.

Sad how easily he slipped back into old habits without her.

“I have always called you that.” He kissed another knuckle. Around them, waiters cleaned up the destroyed table and the bar’s patrons gradually drifted back to their own pleasures. The two men he’d been allowed to bring with him distracted the other voyeurs, affording them a modicum of privacy for this most public reunion. He studied her, hungry for every detail. She seemed leaner, as if all the soft curves had been erased. Her face, always angular and exquisite, was even more refined—like fine porcelain— perfectly pale and unblemished. Her lips were a rosy red, lacking her normal darker lipsticks and cosmetics. Oddly, she wore almost no makeup at all and yet seemed to shimmer from within.

His heart fisted in his chest. He turned her hand and slid his thumb along the pulse point in her wrist. The blood responded to him, drumming as if pumped by his own system. He kissed the soft skin just above the pulse point. The flutter of it tingled against his lips.

“Who are you?” Unlike her earlier antagonism, this question echoed through him, shattering his bliss. Malcolm told him she didn’t remember, but she had answered the blood call. She had come straight to him. Her gaze had locked on him the moment she entered the lounge; he didn’t mistake that.

“My name is Richard, and I am here for you, Kristina.” He watched her eyes, looking for any glimmer of recognition, but despite the liquid heat in her black eyes, no spark of recognition ignited.

“Richard.” She rolled the name around on her tongue, as though testing it. “I like that. My friends call me Kiki.”

“Do they?” This was not how their reunion should go. Stroking the hair back from her cheek, he tucked a lock behind her ear. “Come sit with me, Kristina.” He drew her deeper into the private lounge. The Bloodletter Bar seemed appropriate considering the first time he’d met her was in a rowdy little tavern in Vienna.

She hesitated, sucking her lower lip into her mouth. His eyes narrowed. Where are her fangs? The rich vetiver of the succubi in the room combined with the heavy undertones of blood should have aroused a hint of bloodlust and—even if she exhibited remarkable self-control around the hedonistic pleasures offered in the bar—he called her blood. Excitement would have skittered through her and her fangs should have descended.

“I don’t think I can.” Her wince softened the rejection, but he was not in a mood to be denied. Not after this many years.

“Why do you think that?” Controlling the urge to whisk her out the door and into his waiting car took every ounce of effort. Malcolm briefed him on the plane ride via conference call. Kristina’s binding to the casino meant he couldn’t just steal her—not without damning her. He sent word ahead to the Overseers with a five-million-dollar offer to buy out whatever contract they held over her.

Kristina flicked a look left and right before leaning in toward him. “Do you want to know a secret?”

Glee filled her eyes and drew a reluctant, if genuine smile from him. “Always.”

“I snuck out.” She mouthed the words, but this close, the whisper of breath carried the words to his ears. “If they catch me…”

They would take her away. Richard lifted his gaze from his bride to sweep the area. Malcolm had given him the codes for his private apartments. “Then let us go somewhere private.” He released her wrist and offered his arm.

“I don’t know you.” An amused smile quirked the corner of her mouth, her head tilted and her gaze roamed him from head to toe. “Do I look like the type of woman who is just going to walk out of a bar with some strange man at his invitation?”

Melancholy and delight stabbed him. “Yes. You look exactly like the woman who will join me this evening.”

Her grin grew and her eyes lit up. “Well, considering I’ve already hit you, we know I can do that again, right?”

“Oh yes. Without a doubt.” The thrill of the hunt thrummed through him. This conversation mirrored their first so closely he could almost imagine the coach waiting just outside the doors ready to whisk them away to his castle.

She sidled up to him, threading her arm through his and glancing around. “Then I suggest we go now—or we won’t have time for any fun.”

In wholehearted agreement, he led her from the bar. His men fanned out before and after him. Kristina snuggled against his arm and the hole in his heart began to knit. She stiffened next to him and slid behind him, hiding. He went still. His fangs began to elongate, and he stared at the crowds of partygoers flowing through the maze of the casino. His men closed ranks, and the three of them shielded Kristina in the triangle between them.

“Kristina?” He breathed her name softly.

“Salt and pepper, four o’clock. He’ll make me go back.” Her fingers dug into the back of his jacket.

Richard located the man, nondescript and unthreatening, Richard would have dismissed him. He folded his hands together, one over the other and waited. The vampires he chose for this—Anton and David mirrored his pose. The man took his time. He examined every face, studied every walk and finally took another path.

Nodding to his men, Richard took Kiki’s arm and they moved through the casino to the lobby and blockaded her again at the elevators. He maintained vigilance until they were inside. Kristina bounced when the elevator doors closed.

“That was so exciting!”

He gave her an indulgent smile. “I’m glad you enjoyed it.”

“So,” Kristina leaned back against the elevator wall and glanced from Richard to his guards and back. “Do I get to have all three of you?”