Last night’s episode was one of the best in a long while, not for the ‘shocking’ twists but for the beats of the story, the tapestry that is the underlying mythology of the show: the Salvatore brothers and their love for one woman: Elena.

Murder Brings The Story Together

When I first heard about this episode, most of the spoilers and news focused on Cassidy Freeman’s guest spot as Sage.  It sounded an awful lot like we were going to be spending a lot of time with Sage and I wasn’t entirely sure why. Fortunately, the episode was far more than just an introduction to the vampire seductress who told Damon to go for the button down type (and by the way, when they said we were going to learn how Damon went from just feeding to seducing, I thought we would get a heck of a lot more than we did, but no complaints really). 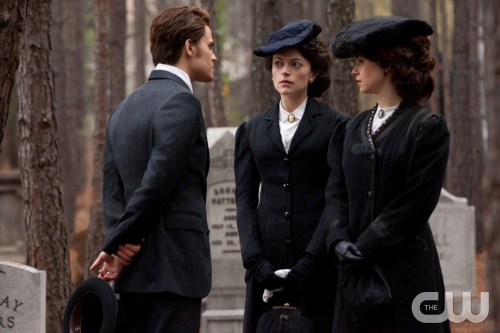 The episode opens in 1912 with Zachariah Salvatore and Sheriff Forbes parting ways late on a cold evening. As Mr. Salvatore crosses the quad, he’s stabbed by an unseen assailant (this is of course after mentioning that another town founder had been similarly slain).  Parallels beautifully with the 2012 murders happening in Mystic Falls which have already claimed the lives of Bill Walters, Bill Forbes and nearly the life of Alaric Saltzman.

We flash forward to the present where Alaric wakes up in jail. It seems that Meredith shot him up with vampire blood after shooting him with her gun. She told Sheriff Forbes that Alaric tried to attack her with the knife and Alaric can’t figure it out. I loved that Damon was on his side and it was even funnier when Liz told Damon to stay out of it or she would put him in the cell next to Alaric.

Better still, Damon settled down for the moment and listened to her. I do like that he and Liz have managed to salvage their friendship from the lies about vampires.  In the meanwhile, Elena was out running with Matt when the Sheriff called her with the news.  She blames herself for what happened to Abby and she heads over to the Sheriff’s office where she runs into Damon.

When Elena snapped at Damon during Dangerous Liaisons, a lot of us took her to task for it. But the pair really haven’t had a chance to talk since then.  She tried to call Damon ten times that night while he was bedding Rebekah and even showed up over at the Salvatores first thing in the a.m.  But Damon is pushing Elena away, not just for Stefan’s sake either. I think he put himself out there, got burned and is now in full retreat.

Interestingly enough, Elena called him on it during their exchange.

Elena blows out a breath and braces herself when she sees Damon: “Were you just with…?”
Damon: “Ric’s fine. Sheriff wants me to stay out of it.”
Elena, frowns, disbelieving. “But you’re not going too…are you?”
Damon with a mocking amount of cavalier: “It seems just as good a plan as any.”
Elena: “Your friend’s in jail for murder. You have to do something.”  Yes Damon, Elena does know you and all mocking aside, she does believe that.
Damon sighs with an air of disdain: “I guess I could rip out Doctor False Accusation’s throat…or maybe her tongue. You know I could chew it up into little tiny pieces and feed it to squirrels.”  He adds that last bit with a mimicing tick tick tick noise.
Elena looks both bewildered and exasperated: “Stop it Damon.”
Damon: “Guess me staying out of it suddenly sounds like a good idea, doesn’t it?”

Okay, we interrupt this exchange.  Damon’s tight, snide smile is both baiting and purposeful. It’s as though he’s waiting for Elena to unload on him and she’s not. She’s being almost calm and rational.  And as if he can’t help himself, he reminds her that he saved her life the night before and that she’s welcome.

Elena: “You know, you could show a little compassion about Bonnie.”
Damon snarks. “I know, you’re right. Her and her mom must really be hurting right now. Should I send lasagna?”
Elena purses her lips. “Okay, now you’re just being mean.”
Damon: “I’m mean. You hate me. The Earth is back on its axis.”
Elena starts to walk away and looks back at him, her voice is low and it’s husky with emotion: “You know, if you keep pushing people away, you’re going to end up alone.”

Damon’s eyes squint and he frowns as she leaves.  I think it might be the first time he realizes that what she said that night might not have been what she meant.  It’s a pause he needs to take. Because Elena didn’t blow up, she didn’t yell, she didn’t rail and she didn’t agree.  She just looked sad.

Brotherhood and the DTs


Damon comes home to find Stefan trying to journal and tapping his ring in agitation on the table. It seems that Damon remembers something about another killer in Mystic Falls and he’s trying to put the pieces together.  He’s also keeping an eye on his brother.

Best line of the night: “Dear diary, a chipmunk asked me my name today. I told him it was Joe. That lie will haunt me forever.”

They discuss the year, 1912 and both remember it.  Stefan returned for the funeral of their ‘uncle’ who as it turns out was their ‘nephew.’  Apparently Papa Salvatore knocked up one of the maids and after their deaths in 1864, the family name was passed onto the bastard along with all their holdings.  That young man grew up, married and had a son: Zachariah…who was murdered at the beginning of the episode.  At least that ties it together for where the other ‘Uncle’ Zach came from during season one. He was descended from their half-brother. 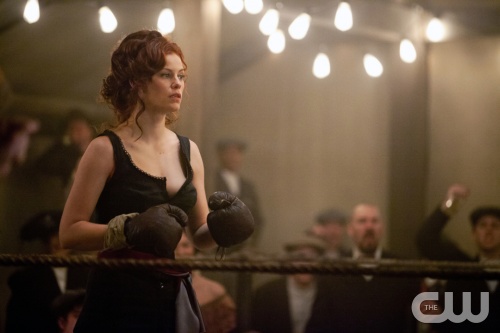 Things we learned from the 1912 flashbacks:

Three Vampires Walk into a Bar 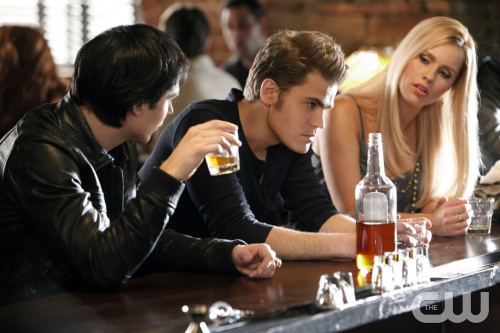 In the present, Stefan and Damon head to the Grill for a drink.  Damon’s trying to remember the facts of that 1912 case, but Stefan’s being all broody and jonesing for blood.  Rebekah’s also there pumping Mayor Lockwood for information on local trees.  She finds out that the Salvatores owned all the mills, so she sidles up to the boys but they keep walking away from her.
Although during their conversation Rebekah let it slip that she knew a Sage. 900 years before, Sage had a thing for her brother Finn.  That would make Sage nearly as old as the Originals and now that Finn is awake, I can image that’s why Sage returns to present day Mystic Falls in the next episode.

Eventually Damon calls Stefan on his jonesing for blood and he goes out with him when Stefan tries to walk away.  With Rebekah’s help, he lures a pedestrian and bites her, getting Stefan excited for the blood. Damon dismisses Rebekah and she leaves. It takes Damon a minute or three to break Stefan up from his meal.  He wants Stefan to figure out moderation…no more all or nothing because it makes him too unpredictable.
In a case of epic bad timing, Elena and Matt walk around the corner to see a covered in blood Stefan and Damon trying to save the girl.  It’s clear from Damon’s expression that this was the last thing he wanted her to see or Stefan to have to deal with.  Unfortunately, it is what it is.  Matt drags a horrified Elena away.
Who Did It?

Determined to clear Ric, Elena and Matt break into Dr. Fell’s place. Elena finds a secret closet hiding hole (because all Founders have some kind of ‘hidden skeleton”) and a box full of files on the murders and a Gilbert journal.  When they are busted by Meredith and later tasked by the Sheriff, Matt reveals to Elena he was able to steal the journal for her. It’s good to be the only human around, everyone ignores him.
Although, Meredith must have some skills to know they were there.  I’m thinking Dr. Fell has more secrets…
Elena also admits to Matt that she fell in love with Stefan because he wouldn’t die. Not like her parents did.  It’s the first time she’s said it out loud and most of us knew that.  When he asked her about Damon, she said Damon kind of snuck up on her, he got under her skin and now she can’t shake him.  Insightful Matt points out “that once you fall in love with someone, I don’t know if you can ever shake them.”
The look on Elena’s face said it all. Hearing it out loud, from Matt, I think makes it more real for her. She does love Damon and she has fallen in love with him.  It’s surreal and poignant in the same moment.
Something Wicked This Way Comes
Alaric arrives home, having been cleared by the coroner’s report about Brian Walters time of death.  Elena is relieved to see him and gives him a hug.  He is her family now.  Later, after Matt is gone, Elena is reading Samantha Gilbert’s journal and Meredith shows up to talk to Alaric.
Interestingly, earlier in the episode Meredith pointed out that Elena didn’t really know Ric. He’d gotten into a lot of fights in college and Isobel took out two restraining orders on him before she married him.  But Elena didn’t believe her, but I figure something is there. I think Alaric might be a founding family member after all — distantly related to the Gilberts or the Salvatores.  Me personally, I’m rooting for Salvatore.  That would be fun.
In parallel scenes, Stefan shows Damon a news article from 1922 with the confession of Samantha Gilbert. She’d apparently gone a little mental and she confessed to the crimes. She was institutionalized for the rest of her life.  Damon frowns, because they’d know if she were a vampire and he was pretty darn sure he’d killed her before then (remember the fights and the girl Sage sent him after, could have been Samantha).  But, Stefan points out, she could have the ring.
The Gilbert family ring.
The boys stare at each other.  Elena reads Samantha’s journals and see that she was having dark nightmares and losing time.  Meredith tells Ric that she is sure he is the killer, that she did all of this to cover it up so they would look elsewhere.  She thinks the ring is driving him insane.
The Gilbert Family ring that brings people back from supernatural death.  Jonathan Gilbert went insane. His granddaughter went insane.  Now Alaric may be going insane.
Dying and coming back to life has to have consequences.  And what about Jeremy? Jeremy who has died and come back — twice – with and without the ring.


Is Ric possessed? Maybe.  Or is the ring recharging itself? It was created by a witch. Witches are all about balance. For every life that is given back, what if the ring must take a life…it could be a bit twisted. Or are they going down the road of demon possession which could be some seriously meaty material for Matt Davis.

Me, I’m just waiting for Damon and Stefan to break land speed records to get to Alaric — who is with Elena.  The one person they protect above all others and Alaric’s killing founding family members.

Still — it’s good to be right that Alaric was the killer. Overall, I loved this episode because it enriched the relationships between Stefan and Damon and to a certain extent between Damon and Elena.

What did you think?