Two lies and a loving truth—I couldn’t help but be utterly
delighted as The Vampire Diaries
returned with a powerful, poignant episode motivated by two of the most narcissistic
characters the show has ever seen. 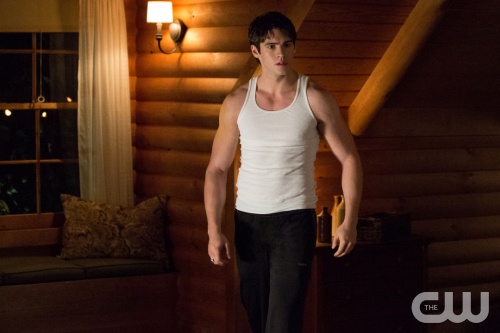 Carol Lockwood, You Will Be Missed
The funeral is taking place in the high school gym—which I
don’t completely understand. That said, Liz’s eulogy was lovely and made all
the more powerful by Tyler’s emotional breakdown as he had to get out of there.
Like Elena and Jeremy before him, he’s lost both of his parents—only in this
case he lays the blame for her death at his own door—if he hadn’t gone after
Klaus, chances are the Original wouldn’t have killed her mother.
I wish I could say he was wrong.
The Bitch is Back 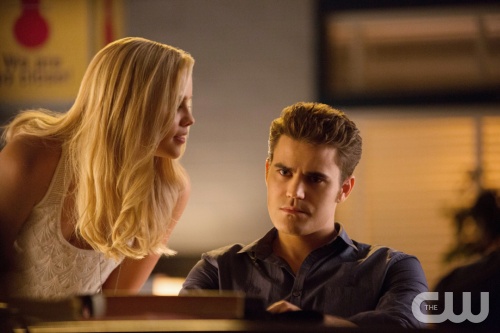 I know I’m in the minority here, but I’ve never been a fan of
Rebekah—until tonight’s episode. She makes her way through the school, snapping
Elena’s neck and then compelling her to keep her ass in the chair in the
library. She summons Stefan imperiously to come rescue his ‘beloved’ and Stefan
decides to go after her with Caroline—allow me to pause and say I think he went
there with a death wish frankly because neither he nor Caroline have the chops
to take on Rebekah—particularly when she is expecting them.
But I digress…
Rebekah wants to play catch up on what she’s missed since
Stefan conspired with Klaus to dagger her. She also wants the cure. She compels
each of them to tell her the truth. Little did she realize that Elena and
Stefan broke up, but it isn’t long before Caroline blurts that juicy morsel
out.
The Original vamp is delighted to hear this gossip and she
wants all the deets. It’s not long before Stefan says they broke up because
Elena slept with Damon. Not to call Stefan on his timing, but she slept with
Damon after, but whiny boy needs to complain. His hostility and disgust are
self-evident.
Note: Caroline looked mighty guilty
when Elena stared at her. Because it was Caroline who spilled the beans.
Frankly at this point, Elena would be well within her rights to never trust
Caroline again.
Continuing with the flaying of Stefan’s heart, Rebekah asks Elena
for all kinds of answers including one that turned quite self-revelatory for
the newbie vamp: she’s in love with Damon.
While we the viewers have known this for quite some time, the angry
admission that she didn’t sleep with Damon because of the sire bond but because
she was in love with him just drove the stake deeper in Stefan’s heart.
Elena also confessed that she loves Stefan, but she isn’t in
love with him. Stefan treats her like a broken doll.
Note: He absolutely does and that
doesn’t change with this episode.
A little bored with the game, Rebekah learns that Professor
Shane knows what she needs so she sends Kol to fetch him. Once Kol arrives,
Rebekah also summons Tyler. Once he’s there, she compels him to shift. She
tells the three captive vamps they cannot leave the school and trots off to get
info out of Shane. 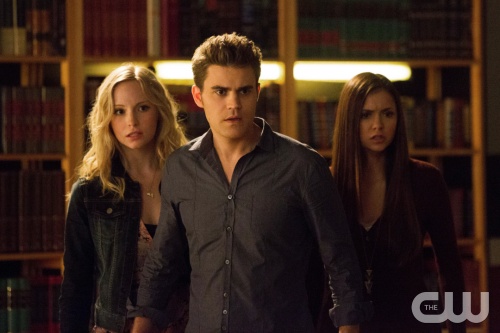 Bonnie’s Not So Awesome Spell
Bonnie’s struggling with having her heretofore unseen Pops
back in town. (Is someone going to ask why her last name is Bennett and not
Hopkins?) Apparently Daddy hates magic and isn’t keen on his daughter being
involved in the town’s resident vamp problem. He plans to crack the whip and
make things tougher. Yeah, um, good luck with that. 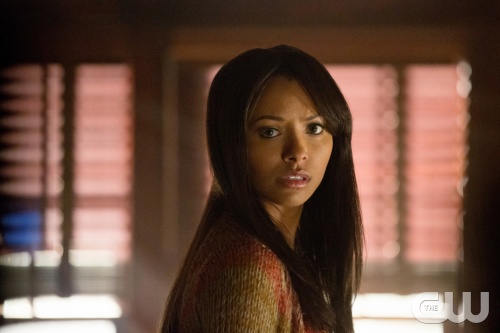 Shane gives Bonnie a human bone necklace as her graduation
present. Um…yay? He tells her she knows everything she needs, too. Well,
everything he needs her, too.  But Kol
snatches him and Bonnie heads to Mystic Falls High (because of course that’s
the first place I’d look, too). She runs into Batty April who tells her Rebecca
is hanging in the library with the other vamps and getting answers.
Seriously? April can die now.
She believes everything the 1000+ year old vamp tells her
after she pulls the dagger out, but not the people around her. But again I
digress…
To protect Shane, Bonnie casts a spell only all it manages to
do is inflict all the damage he is receiving on April ala the transfer spell
done between Katherine and Elena in season 2’s epic Masquerade episode.
Sidenote: Bonnie objects to Expression for about five minutes until Shane tells her that it’s not good or bad magic, it just is. If you have to murder dozens upon dozens to get this kind of magic–it’s bad. Just saying.
Also, can we book a trip to Tibet for all the vamps to learn how to resist compulsion. Shane can do it. Caroline’s dad could do it. Tyler’s learning how to do it on his own. Just a thought.
Baby Got Wolf
Stefan and Elena flee from Tyler and try to hold the doors
closed so he can’t get them. Elena even rips off a locker door and bashes wolfy
on the nose as they push the door closed. Tyler leaves them be and later
Caroline finds him curled up naked in front of what the memorial altar for his
mother. He sobs in Caroline’s arms.
Kudos to Tyler for fighting the compulsion so long (something
none of the others managed to do) and getting to shift back without hurting
them. Boy has grown so much and at such a great cost.
Shane Isn’t Telling
Shane tells them it’s funny they are torturing him, he doesn’t
mind sharing the location of the cure—after all he’s been working hard to get
to it. He knows where it’s buried and it’s buried with Silas.  This freaks Kol out. Apparently Silas is a
bit of a boogeyman to Originals.
Kol wants nothing to do with this and drives a mop stick
through Shane. Thanks to Bonnie’s spell he doesn’t actually die, but Rebekah is
pouty.
Shane confirmed he was responsible for dozens upon dozens of
death, but it’s okay because when he wakes Silas, all the dead will rise.
Um, point of order—by rise does he mean zombies? And by all
the dead does he mean every single person EVER that’s died? Or just all those
turned into vamps? I’d like some clarification because frankly, that just can’t
be good.
Erase My Memory Before You Go Go
Rebekah’s pouty because Stefan and Elena managed to survive.
She offers to wipe all memory of Elena from Stefan’s heart, so he can be free
of everything they ever did, pain included. Stefan says yes, do it—Elena is
more than a little stunned by how quick Stefan is to make that choice.
However, Rebekah would rather he live with his pain and
denies him the opportunity.  After she
leaves, Stefan doesn’t want to talk to Elena. He’s “done” and walks away.  She starts after him and then lets him go.
Good girl. He can sulk on his own.
Meanwhile, Back at the Lake… 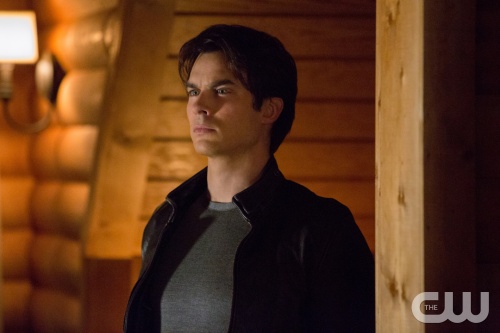 Damon continues his quest to train Jeremy into a vampire
hunter. He wants him fully up to speed before they go after real prey and just
practicing with Matt isn’t doing it. He’s also tormenting himself by listening
to voice mails from Elena asking him if she can come back. She misses him and
she doesn’t think the sire bond is why they have grown so close.
Jeremy and Matt keep ordering pizza, but Damon pays off the
cute delivery girl to not come back and sends the boys on a run around the
lake. Later he has Jeremy putting a gun together and loading it. Jer’s pretty
slow, so Damon pulls it apart and tells him to do it again.
Impatient Klaus shows up and Damon gives Jeremy an object
lesson. Shooting Klaus three times and tells him “That’s for Carol.”  We forget that Damon is fond of several
people in town, Carol Lockwood and Liz Forbes are both on that list.
Klaus wants to know why Damon hasn’t just turned the whole
nearby lake community so Jeremy can kill them, but Damon says the idea occurred
to him, but he decided against it.  The
Original correctly assumes it’s because Elena wouldn’t approve, but it’s also because
Damon wants to protect Jeremy. Unfortunately for all involved, Klaus is under
no such compulsion. He’s taken care of the problem.
Pizza girl is the first one to attack and Jeremy has to stake
her. Damon isn’t thrilled, but deals with it. He’s burying the body when Elena
calls. She confesses to him what happened and that she’s realized she’s in love
with him.  The words are the ones Damon
has longed to hear for so very long.
This has been a LONG time coming. No
one on this show has deserved to hear those words more than Damon did in that
moment.
He tells her to listen carefully, get in her car and come to
him.  He can’t take being away from her
anymore than she can being away from him.
He’s going to do whatever it takes to get her the cure so she can be
free in her choices and he’ll do whatever it takes to protect Jeremy. He also
warns her he’s going to have to do some thing she won’t like—first up? Taking Matt
and Jeremy into town where Klaus is having a drink in the local bar and all the
patrons are in transition.
Yeah, this is gonna be messy.
I Hate My Brother
Back at the Salvatore manse, Rebekah arrives to find out why
Stefan asked here there. He has a plan, he wants to partner with her to find
the cure. She hates her brother and he hates his. Klaus has the sword. Damon
has Jeremy. Shane has Bonnie. They need to team up to control who gets the
cure.
So they make a pact.
Because Stefan won’t be happy until he’s cured Elena and figured out how
she really feels.
Wow—talk about your selfish loves.
Stefan really needs to get over himself. Because at this point, he is the worst
thing that ever happened to Elena.
Overall! Both thumbs up. I cannot WAIT for next week.
What did you think?