!0 Things I Love About You…Thor

So where does one begin in an hour chock full of Easter eggs
for the fans, bread crumbs for the season and two, count them two, smoking hot
moments that had me backing up to watch them again and again?
It’s a Cold, Cruel
Morning
It’s Elena’s 18th birthday and as with every other major
event in Mystic Falls that means it’s time for a party.  Elena wants nothing to do with a big
party, particularly because she is worried about Stefan, grieving for Jenna and
coping with the idea that ‘life goes on.’   Don’t worry, Caroline Forbes, master planner, has
already sunk her teeth into the planning of a shindig to blow the roof off the
Salvatore house.   Gotta love
that she talked Damon into letting the entire high school keg it up there.
Alaric is still sleeping on the sofa at the Gilbert house
because he doesn’t want to sleep in Elena’s dead parents’ bedroom or in the
bedroom of his dead girlfriend.
Note to Elena, time to pack those rooms up and reclaim them.  You keep living in the past and you’re
going to end up with some severe emotional problems, just ask Damon and Stefan.
Speaking of Damon,
I was not thrilled to see girlfriend Andie back in the picture.  Nice actress and all, but the character
does nothing for me.  Thankfully,
someone in writer land was listening because I got a treat at the end.   Andie won’t get Damon a drink, so
he gets out of his bubble bath all soapy and naked (damn the angle of that
camera) and strolls downstairs, dripping, yes dripping, to greet Elena who’s
walked in with a clue from Sheriff Forbes.

Hitting pause for a moment, how cool is that? While we didn’t get to see Liz
Forbes in this episode, I knew she’d make a smashing ally and she is helping
Elena and Caroline track potential crimes that could be linked to Klaus and
thus Stefan.
Okay, back to the episode.

Damon greets Elena on her birthday in his birthday suit.  Love. Love. Love.   Elena squeaks and throws him a
tiny tea towel (yeah honey, that’s not gonna cover much but hey, that’s okay by
me) and turns with her hand over her eyes, but did anyone else notice the way
her fingers were parted allowing for a yummy peek?   (S’okay, Elena, I would definitely have been peeking
too.
Party Prep

Party pre-prep is in full swing and there’s Tyler, helping
Caroline like a dutiful lad who has more than friendship on his mind.  I have to say, Tyler as a character is
truly fantastic.  He’s evolved
since first season prick Tyler.
He’s got a good heart, he’s loyal and his sense of humor is off the
charts dry and quirky.
Caroline and Elena are chatting it up, as besties are wont to do.

Elena doesn’t understand why Damon wasn’t more excited about her clue.
Tyler: D’oh, maybe he isn’t trying that hard to find Stefan,
because it leaves the playing field wide open for Elena.
Caroline: TYLER!
Elena is sure Damon is trying, because he cares and he knows
how much Elena cares.
Tyler: Yeah, but you kissed him anyway. 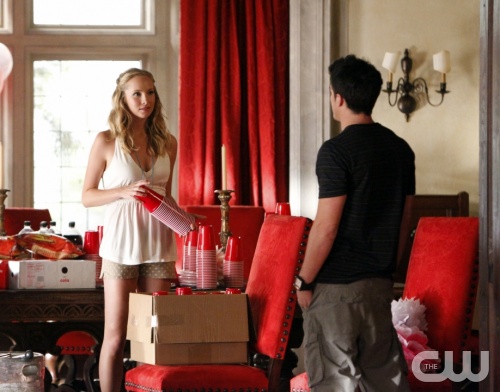 So Caroline and Tyler’s tete a tete are sprinkled with
gossip about Elena, Damon and Stefan (way to go girl code, Caroline).   Elena is more amused than upset,
Caroline is mortified and Tyler is like ‘what?’  he was just trying to help.
Later conversations between Tyler and Caroline include the
gems of:
Caroline: “Matt thinks we’re dating.”
Tyler: “So does my mom.”
Caroline: “You’re asking that slut to Elena’s party?”
Tyler:
“Yeah. Not like I have anything else going on and I’m horny all the
time.”
Caroline: “Me too.  It’s a vampire thing, you know all these hormones and
heightened feelings.  Makes me
crazy.”
Tyler: “It’s a werewolf thing too!”
At the party, Tyler is burning up the floor with his little
bit of nookie as Caroline glares moodily, a very
large bottle of alcohol in her hand.
Matt (stoner Matt no less) shows up and things get tense.  It takes Tyler ten seconds to notice
and pull his arm candy over to check on Caroline as Matt ditches her.  Again.
Bubblehead Arm Candy gushes: “Caroline, this is a great
party!”
Caroline: “Thank you.  Now leave it.”

And wham, off goes Tyler’s sexual healing for the evening.   Tyler stares agape at her,
because it’s clear, that Caroline is distinctly unhappy and says what the hell?
He already went down this road and she shut him down.  So if she wants something to happen, she needs to do
something.

One pair of scorching kisses later and Caroline and Tyler race back to the
Lockwood Mansion for some wild, bed tossing sex.  Did you not laugh when she ‘threw’ young Master Lockwood
onto the bed?
Go Team Forewood!
It’s Her Party, She
Can Cry if She Wants Too
Meanwhile, Elena is sitting in Stefan’s room wrapped in
melancholy.  Damon’s usual snark is
in abeyance as he gives her back the necklace (dude, how many times is Damon
going to find that and bring it back to her? It’s so damn sweet) and sweeter
still is when she asks him to put it on her.
Her death bed declaration that she loves him just the way he
is sits like a giant elephant in the middle of Stefan’s abandoned bedroom.   Elena’s not really in a partying mood and she is worried that
she’ll ruin it by crying.  Damon
teases her that it’s her party and she can cry if she wants too (groan,
guffaw), but he cheers her up enough to gather her composure and go downstairs
on his arm to the wild party in full swing. 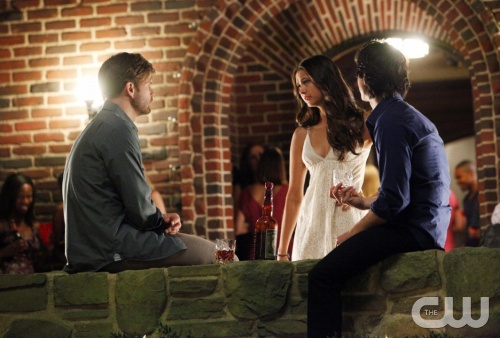 Overwhelmed, Elena makes the best of it and when things
become too much, she escapes to Damon’s bedroom, in search of Damon (nice), but
finds Caroline instead.  She also
finds the closet where Damon has been mapping Stefan’s kills.  He’s trying to find his brother harder
than Elena realizes, but Damon doesn’t want Klaus to know Elena’s alive or
Elena to get anywhere near Ripper Stefan.
And I love you Elena, but considering your penchant for
rushing into houses packed with vampires, challenging creatures far more
powerful than you and the blind faith you have in your own survivability, I’m
with Damon.  You do need to be kept
in the dark.
But now Elena knows and she wants to confront Damon about
it, unfortunately…
Stefan The Ripper
Stefan and Klaus have spent Elena’s birthday murdering a
couple of college co-eds (which Stefan put back together again) — was that not
priceless when Alaric and Damon discovered the bodies.  Damon had seen it before, remember,
he’s seen Ripper Stefan and knows that his brother goes mad, then feels some
remorse and tries to do things like put decapitated heads back on bodies.
Damon cleaned up the mess, but he was seen.  The watcher warns Klaus that Damon is
still tracking he and Stefan, interrupting their bar crawl of hit the werewolf
(guest star David Gallagher) with the wolfsbane darts.  Klaus is going to go after Damon and
end his party pooper stalking, but Stefan asks for the honor. 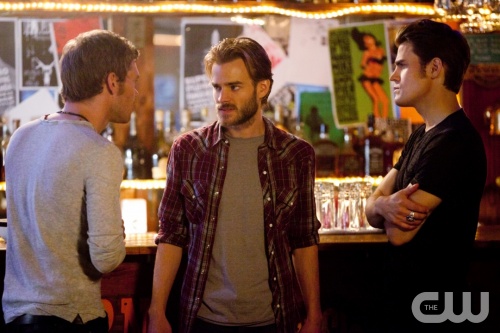 Klaus doesn’t trust Stefan, he’s pretty sure that even with
all the blood drunkeness, he hasn’t fully turned to the dark side, but he
allows Stefan the chance.  Stefan
then stalks Andie at the television station, compels her onto the catwalk and
has her step off to a bone crunching death at Damon’s feet.
The point, brother to brother, is for Damon to let Stefan
go.  Period.
An aggrieved Damon returns to the Salvatore house just in
time to get the third degree from Elena.
Interestingly, Elena’s more upset that Damon is keeping her out of it
and that he made her feel foolish (hmmm, she wants Damon’s respect as much as
anything) for her clues.  Damon,
however, is really not in the mood.
While he wasn’t in love with Andie, he’s definitely feeling some guilt
for her death.
He tells Elena in no uncertain terms that those deaths he
was tracking weren’t just Klaus, they were Stefan too.  Cuddly Stefan has been replaced by
grr-and-argh Stefan and she may never see her Stefan again, at least not in her
lifetime.
That statement was a gut punch, for Elena and Damon.  His gaze filled with pain even as he
said it, I think as much for the idea that Elena’s life was finite and would
end.
Powerful stuff.
And here come the cliffhangers…
Caroline leaves a deliciously bare-chested Tyler to dress
and sneak home for her walk of shame, but she gets caught by Mama Lockwood who
appears dangerously amused at Caroline’s presence.  Unfortunately, when Caroline touches her purse, she gets
burned (prolly vervain) and then shot, three times, with vervain darts.
Dear Mrs. Lockwood,
please understand that your son will be a tad in-FUR-riated with you and
Caroline’s mom, the Sheriff? She’s going to kick your ass.  I’m just saying.
Alaric moves out of the Gilbert household.  He’s got to get his life together and
he can’t be the ‘parent’ Elena and Jeremy want.  Don’t worry Elena, Alaric will still be your buddy.
Jeremy’s still sees dead people.
And Stefan took a few moments to dial Elena’s phone from an
unknown number.  Although he said
nothing, he listened to her tell him it would all be okay and that she does
love him and that he has to hold onto that.   Very sweet homage to the Buffy/Angel moment all those
years ago.
And that’s a wrap.

Next week, Elena wants to go hunting werewolves and we get to
see if Klaus feeding David Gallagher his blood and snapping his neck worked.


What was your favorite part?