Once Upon a Time with Maleficent

It’s amazing how much The Vampire Diaries relies on the “Previously on The Vampire Diaries…” prologue of every episode to catch viewers up.  Third season has barely slowed down to catch its breath and Ghost World was no exception to that rule.  From the moment Jeremy saw Anna and Vicki at the end of season two’s finale, the fans have been wondering what’s going on.

Last week, in it Smells Like Teen Spirit Vicki’s ulterior motives were revealed.  She was working for the original witch, the witch who cursed Klaus and apparently, not even death is enough to turn this witch’s vengeance down.  She’s working from the other side to face down the Original family and you know, The Vampire Diaries has proven time and again that vampires and witches just don’t mix.


The ghosts are hopping in Mystic Falls and Alaric sums it up nicely when he warns Elena that with all the ungrateful dead they know, it might be a good plan to leave the ghosts alone.  But thanks to the Original Witch helping to push Vicki to the other side and Bonnie widening the door to shove her back, the door is now wedged open and the restless dead are on the prowl.  In short summary we have:

So, all caught up?

Let’s chat about what was hot, what was not and where the hell do we go from here. 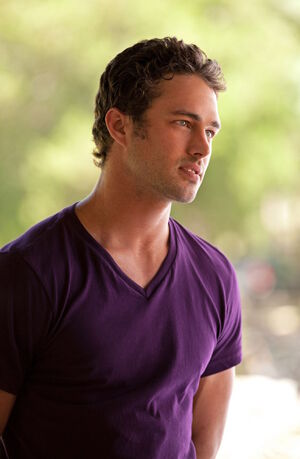 Damon (Ian Somerhalder)  killed Mason Lockwood (Tyler Kinsey) after Mason ratted them out to the Sheriff and damn near got Damon and Stefan killed.  Mason only went after them after Damon went after him.  So, arguably, we could point fingers all the way. It didn’t help that Mason was Katherine’s (Nina Dobrev) boy toy (although he was keeping his secrets from the Katherine too, including the moonstone she was desperate to get her hands on).  It’s kind of funny, because Mason’s been dead for a while and a lot has happened in the Vamp/Wolf warfare in Mystic Falls including the loss of most of Mason’s pack and Tyler (Michael Trevino) transitioning.

According to both Mason and Anna (Malese Jow), they’ve been trapped on the ‘other side,’ not moving on, only able to watch, but not interfere.  Despite torturing Damon at the beginning and demanding a half-assed apology from Damon,  Mason doesn’t want revenge, he wants redemption.   He leads Damon on a hunt through the old Lockwood cellar.  The narrow passages included vamp traps that drove four stakes through Damon soaked in vervain.  Mason rescued him, but at the end of the tunnel was a passage that Damon couldn’t enter because he hadn’t been invited.

Unfortunately, the door to Ghost World closed before Mason could tell Damon what he saw on the wall.  But more on that later.

I loved getting to see Mason again.  I wasn’t his biggest fan the first time around, because he was hot-headed, arrogant and nearly got my boy killed. But Mason’s return was a nice resonance.  I only wish Tyler had gotten to see him.   Tyler and Rebecca were both conspicuous in their absence in this episode. I can only guess they were doing the nasty with the girl she presented to him in the last episode, but we’ll find out more on this later. 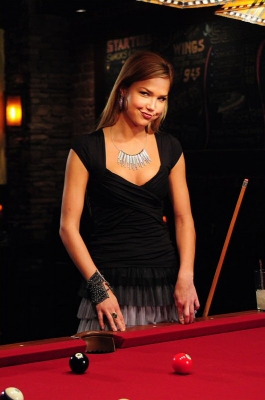 Lexi (Arielle Kebelle) was Stefan’s (Paul Wesley) oldest friend. The three hundred year old vampire met Stefan not long after his turn.  She recognized him for what he was.  Over the hundred plus years of friendship, she would drag him back from the precipice, rehabilitate him and he would be Stefan again, not the Ripper.  Elena (Nina Dobrev) was thinking about Lexi before the ghosts burst out.

Upon arrival, Lexi slammed robo-Stefan into a car, knocked him out and then took him to find Elena.  They imprisoned him in the Forbes jail cell that dates back to the 1860s and locked him up.  Lexi then explained the detox process and she used her ghostly abilities to speed starve Stefan up to five years without blood.  My only issue here is that ‘five years’ without blood and he wasn’t a skeleton. So either he was bloated on it or the ghost starvation didn’t actually affect his body so much as his mind.

I’m willing to go with that.  Unfortunately, despite taking the hard tack.  Lexi wasn’t able to get Stefan to turn his emotions back on and after she was shut out with the ghost door swinging closed, Elena told Stefan she wasn’t giving up on him, but she wasn’t going to wait for him either and left him in the cell.

One note to Elena:  Getting right up in the face of the starving psychopath who already bit you when he’s starving is STOOPID.

I wondered from the moment the ghosts started popping up and the fact that Mystic Falls was celebrating another Founder’s  Event (how many did these people have?) whether we would see the tomb vamps.  Of course we did.  Anna stuck close to Jeremy (Steven R. McQueen), but Frederick and his boys had already gutted a Fell.  Later they went after Mrs. Lockwood (Susan Walters).  Caroline (Candice Accola) fought them off and did pretty well.  Course, they were all older than her (if dead) so I’m not sure why she was such a bad ass where they were concerned.

They really need to clarify this point.  But it was cute that Caroline protected Tyler’s mom.


I really hated that Anna died in season one.  The character’s rich connection to Jeremy was so much more passionate and innocent than his affair with Vicki and more ethereal than his connection to Bonnie.  With Anna, Jeremy is the innocent one and the protector at the same time.  It’s heart breaking to think she’s spent years waiting to get her mother out of the tomb only to lose her in a few days and then she too died.  Now, in the months since her death, she has lingered, watching Jeremy, all alone. 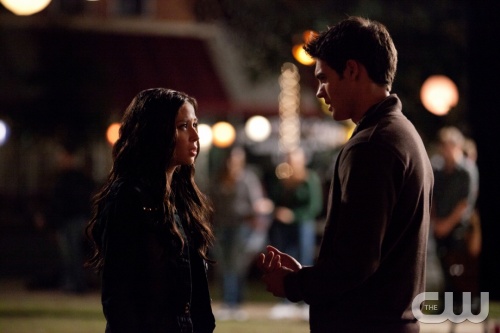 In many ways, Jeremy’s love for Anna remained unacknowledged until these last few episodes.  Did he cheat on Bonnie? Yes.  But he didn’t even understand the depth of his feelings until he was offered this second chance.  Their goodbye was among the most heartrending. Anna had stolen Elena’s necklace because she didn’t want to go, but Elena pointed out that Jeremy was at the beginning of his life, she had to let him go and Anna told Jeremy that Elena was right.  Anna had to let go of Jeremy and Jeremy had to let go of Anna.

He left her to take the necklace to Bonnie.  As the ghost door shut, Anna finally saw Pearl and the two were reunited.  In their way, they found peace.

Of all the deaths on The Vampire Diaries, Gram’s (Jasmine Guy) was probably the most profound. She used so much power to open the tomb and then to hold it open to get Damon back out that it killed her, devastating Bonnie and nearly ending Bonnie’s friendship with Elena.  When Bonnie’s grimoire fell out of her backpack and highlighted a manifestation spell, I figured it was the wisecracking, savvy lady that taught Bonnie and I was right.  It made my heart squeeze when Bonnie looked up and saw her.  I loved her warm greeting to both Bonnie and Caroline and I loved how she gently, but firmly she chastised Bonnie for her mistakes (including bringing Jeremy back). 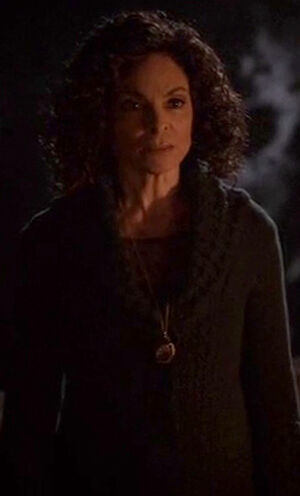 Witches talk, even on the other side, and Grams knows that Original Witch has a bone to pick with the Original Vampires and she wants Bonnie to stay out of it.  For now, they will destroy her talismen, closing the door and hopefully her influence.  The women link hands and once Jeremy brings the necklace, they ‘destroy’ it.  Grams vanishes in a poignant moment, an all to real reminder that she is still dead and beyond Bonnie’s reach.   Bonnie then kicks Jeremy to the curb, but when she is alone, the fire flares and Elena’s necklace (the talismen) has been restored.

Yeah, that can’t be good.

Damon and Alaric have been on the outs since Damon snapped his neck in Disturbing Behavior.  But Damon calls him to the Lockwood Cellar to go investigate what Mason found since Damon can’t enter the room.  Alaric is testy with him and when Damon offers him the same ‘half-assed’ apology he gave Mason, but with genuine feeling, the two reach an accord.   Deep in the cellar, Alaric discovers a cave painting with Futharc (Nordic writing) on the wall.

What does it mean?  Well that’s for next week’s episode: Ordinary People to tell us.  I can’t wait because The Vampire Diaries is showing no signs of slowing down.

What did you think of tonight’s episode?  Love it? Hate it?  Desperate for more?