Sorry to take us right down to the wire, typing this up just
seven hours before we get our Vampire Diaries back from its latest three week
hiatus.  The Murder Of One had some seriously great moments, hilarious one
liners and moments where I just wanted to bang my head against the table.
I really can’t put my finger on the uneven writing in the
last three to six episodes.  Where
Vampire Diaries usually charges us up, amping up the tension of every episode
over the last, lately it feels like we’ve been treading water.
But I digress…
Wood Shop Fun
The episode opens, amusingly enough with Elena delivering a
care package to Rick. Not her brightest move, but totally Elena. She takes care
of all the crazy, homicidal people in her life. Only Damon answers the door and
nope, she can’t come in and yes, he taunts her. No matter how aggrieved she is,
these sharp little spats always seem to bring the spark back out in her.  Elena leaves and we get Damon’s quiet, she’s
down the stairs and out the door.
As soon as she’s clear, Stefan and Alaric go back to work
chopping up the Wickery Bridge sign to make stakes.  Alaric is happy to help them make stakes, but
he wants to turn himself in for his crimes.
Nope, Damon isn’t going to let him. Not when he and Stefan have their
own share of not so good choices on their hands and Alaric’s not exactly
responsible for the deaths, his darker half is.
Having Damon give Alaric his ring and tell him they are
gonna kill vampires did bother me a little. That ring is why Alaric is becoming
a homicidal maniac. Damon’s putting a lot of faith in Bonnie’s Anti-Hyde Chai
Tea Non-Latte to keep Alaric under control.
Gathering the Troops
When the group works together, they are at their best, so
color me delighted that Damon and Stefan’s next move was to text Bonnie,
Caroline, Elena and Matt to meet them in the middle of no where. Everyone shows
except for Bonnie, whom they all assume is off being in a funk over mom Abby.
Sadly, based on her recent behavior, this doesn’t arouse suspicion.

I appreciated Caroline and Elena’s talk in the woods.  Caroline is trying to reconcile the idea that
it was Alaric who killed her dad. But she decides to adopt a page from Elena’s
book and believe that he can get better and that maybe someday she can forgive
it.
The team is amped that they have a weapon to kill Klaus.
Finally.
Nothing Says Revenge
Like an Original Scorned

Meanwhile, Klaus and Rebekah are in an undisclosed big city
trailing Finn.  They snag big brother to
bring him back to Mystic Falls.
Interestingly enough, I thought Klaus was the oldest of the siblings in
the New World, but it sounds like Finn is.
Finn doesn’t care about their arguments. He wants his existence ended.
Vampires should never have been created and he’s fine with Klaus daggering him,
even if it doesn’t do the same to Klaus it will hurt him long time.
But Klaus has an ace up his sleeve. He gestures to the
stairs as Sage descends them.  Finn is
actually speechless for a moment and then the two are hugging.  It was actually a rather sweet moment for
characters that we don’t know all that well and particularly since Finn has
only been interested in dying since he awoke.
Hmm, wonder if he thought Klaus had murdered Sage all those years ago.
Klaus gets a note from Kol that he’s in place (yeah that’s
not ominous); just let him know when he’s needed.  Klaus is satisfied and Rebekah excuses
herself to go and deal with Damon. He seduced her, played on her feelings and
totally sexed her up to get into her head…you know, for most women it’s the
other way around, but Rebekah’s pissed and she wants to teach Damon a lesson.

Aside: The torture
scene with Damon was harsh, but I have to admit, Rebekah has more brain cells
than her big brother Klaus. She took the time to drain Damon’s blood down to
get all the vervain out of his system so she could torture him mentally and
physically.  Remember back when Klaus was
pouting about the coffins and not being able to compel the information out of
Stefan — bet Klaus feels stupid now, huh?
Breaking the Chain
So, the reason why Bonnie didn’t show up for the pow wow,
she’s hanging out at Casa Mikaelson courtesy of a Klaus-napping.  He tosses her her grimoires and tells her
that she has to undo the spell binding he and his family members or he’ll start
killing everyone she loves, maybe starting with Abby. (So very tired of the
repetitiveness of Klaus’ threats.  He can
be a great character, but really, Klaus wants something so he pitches a temper
tantrum and threatens to kill people – same ol’ same ol’).
This drags on and off through the episode, Bonnie wrings her
hands, she’s not sure she can do it. Klaus offers to motivate her by showing
video of Jeremy playing with his dog. Apparently Kol’s in Denver. He can snap
Jeremy’s neck just like that. Finally, Bonnie focuses and concentrates and does
a little do dah with the collection of the five siblings blood and undoes the
spell.
Color me stupid, but really?
She doesn’t know exactly what Esther did and she didn’t have the magical
ingredient of Elena’s blood, which acted as the catalyst for the spell, and she
just undoes it…just like that?
And Bonnie? Bonnie folded like a cheap tent.  She might as well just move in with Klaus
now, because he’s officially made her his bitch.
Le sigh.
Going Through with
the Plan
Stefan is frustrated by the fact that Damon was taken, but
Elena talks him out of rushing the doors to get Damon back. She doesn’t intend
to leave Damon there, but they need a plan.
Stefan gets angry, because he has a plan and he declares that his anger
is all that he has. 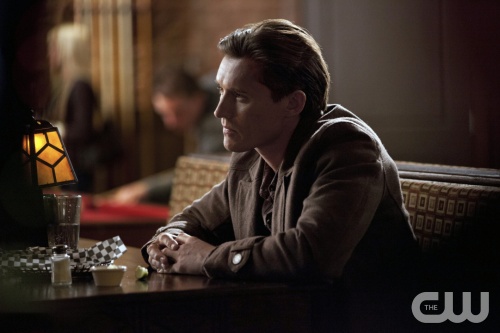 Yeah, I’m not worrying about the triangle this week. I am so
over Stefan’s “Klaus took everything from me” as much as I am “Bonnie always
loses everything.”  Anywho, working
together, they notice Finn and Sage are out and about having a reunion.  They wait until they are outside and then
they jump the with Elena and Matt playing jack in the box out of the back door
of the grill, Stefan is successful and he daggers Finn who dies before a
horrified Sage’s eyes.
Unfortunately (well fortunately), Bonnie managed to separate
the blood just before the dagger went home so it didn’t kill all the Originals. 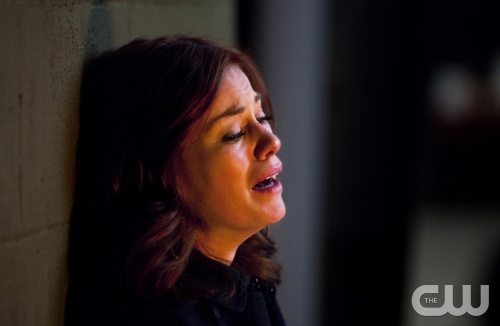 The Bloodline
Now, I don’t know if you remember my comments way back on
Dangerous Liaisons when Elena gave her blood to Esther without asking what the
potential all out could be and one of those questions pointed out would killing
all the Original vampires end all the other vampires in the world?
Turns out the answer to that question is a resounding
yes.  Sage and her lackey show up at the
Salvatore boarding house. She is all set to open a can of whoopass on Stefan
and beat him bloody before she kills him, but before she can, she gasps, she
struggles and then she falls over and just dies as does the vampire she
‘made’.   Stefan, Elena and Caroline are
confused as to what happened.
But Stefan starts to piece it together. Finn made Sage. Sage
made random dead vampire. Both Sage and random dead vampire died within an hour
of Finn.  Finn’s bloodline was dead.
Oh dear.  While it
takes the others a while to piece it together, my first question was who made
Rose, because it’s Rose’s blood that Katherine used to turn herself. I am
thinking it will turn out to be Elijah. Or Trevor and that Elijah made Trevor.
It would also explain why Elijah took Trevor’s head off.  But Elijah referred to Trevor as Rose’s pet,
so chances are it was Rose who made Trevor.
Still, my money is that Damon and Stefan are in Elijah’s
bloodline, but that doesn’t help Tyler who was definitely in Klaus’ bloodline.
But I think they can save the Hybrids anyway, because it’s
not just Klaus’ blood they needed, but Elena’s.
If Bonnie can do a spell unbinding the Original family from each other,
she can reattach Tyler to a new branch of the Original family tree or even to
Elena directly.
But I digress…
I Hate Dream
Sequences
During Damon’s blood torture Rebekah crawled into his mind
and let him enjoy a vision of Elena sneaking in, freeing him, feeding him her
blood and then kissing him.  Talk about
cruel, but Damon just grinned it off because he enjoyed the dream.  Rebekah threatens to compel him to kill
Stefan…or maybe Elena.  She hasn’t
decided yet. 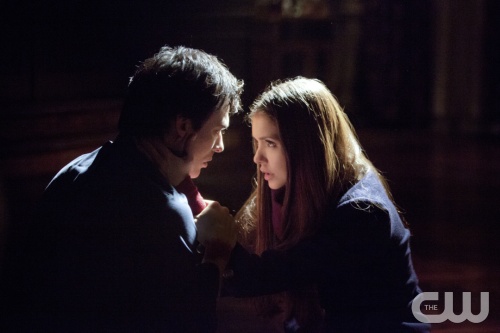 In the meanwhile, Stefan shows up with what remains of the
White Oak stakes to trade for Damon’s life. Particularly because they don’t
know which bloodline they are from. Klaus is amenable but Rebekah is annoyed.
Klaus compels Damon to confirm the number of stakes missing and two are not
present.
Insert standard Klaus threat here. Yawn.
Rebekah releases Damon hurriedly and sends him away with
Stefan. When Klaus calls her on it, she says they at least understand family
loyalty, something Klaus is seriously lacking.
Unfortunately, the last stake was hidden away by Dark Alaric
or Alaric Hyde when he managed to slip his leash of the magic potion. They have
no idea where it is and Damon points out that great, Alaric’s vampire hating,
serial killing alter ego has a stake that can end Damon’s entire bloodline.
Not good.
Nope.
Not good.
Last Thoughts

Overall, this was a better episode than last episode, but
we’re still treading water. I liked that Elena wanted to go after Damon and I
really wanted that to be her rescuing him only to have it stopped by Klaus.
Klaus who’d chain Damon back up, but wouldn’t hurt Elena.
I also need Elena to get off the fence. She keeps saying she
doesn’t know how she feels about Damon and that’s a pile of crap. She knows.
She just doesn’t want to admit. Because, as she told Caroline at the beginning
of the season, if she says it, then it makes it real.

Everyone knows Elena has feelings for Damon except possibly Damon at the moment
whose working hard to keep himself on equal footing after letting it all hang
out.
But we’re down to the final four which means we should be
rocketing ahead.
On my wish list:
Are you ready for Heart of Darkness?  Road trip baby!