Once Upon a Time – Love, Romance and Fantasy 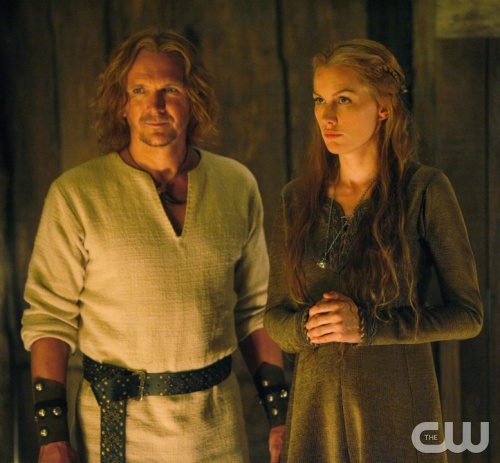 It’s recap and review time for The Vampire Diaries most recent outing: Ordinary People.  The episode focused on the history of the Original Vampire family with all kinds of juicy reveals.  Hard to believe that we are just eight episodes into season three, so much has happened since last season’s “sacrifice.’  This time last year, we met Rose for the first time and we had our first glimpse of Elijah (speaking of which, even with Elijah in the flashbacks, I find myself missing our first original terribly! He so needs to come back!).   With just one episode left till the mid-winter hiatus, let’s do a quick rundown and visit some of the big changes.

Noticeably absent in this episode: Matt, Jeremy, Caroline and Tyler.

Damon let’s Stefan out of the Forbes jail for some good old fashioned brother bonding.  While he understands Elena’s desire to keep Stefan locked up until his blood lust wanes and he potentially comes back to himself, Damon recognizes that won’t happen unless Stefan actually chooses and holding him prisoner won’t cause that.  Their partying takes them to a bar out of town where Stefan feasts on the bartender and the waitresses while Damon drinks and dances.  They also encounter Michael (Sebastian Roche).  Michael threatens to rip Damon’s heart out unless Stefan tells him where Klaus is, but the compulsion Klaus has Stefan under means they have to find a loophole.

Fortunately for Damon fans, Stefan says he can lure Klaus back.  Pleased, Michael lets Damon live and as Damon says later, Stefan’s still a dick, but at least now he’s on their side.  Stefan wants to be free of Klaus, not to go back to Elena, but so he can leave Mystic Falls altogether.

Alaric and the Pictograms

Alaric spends hours pouring over the images on the cave walls, identifying the symbols for werewolf, vampire, witch and of course hybrid.  He is deciphering the story of the original family and the events that happened.  Elena, in the meanwhile, takes on Rebekah directly to learn the story.

When she suggests it, neither Damon nor Alaric are fans of Elena’s plan to talk to Rebekah, after all, she’s a thousand years old, what can Elena really do.  But Elena points out that Rebekah’s joined the cheerleading squad and seems to be immersing herself into life in high school.  Elena just has to go mean girl on her.

“Just make sure she doesn’t power struggle you into a wheel chair.” – Damon warns.

The great thing about this is that Elena’s plan does work, she dangles the threat of Michael, dismisses Rebekah’s homecoming plans and dress show and manages to pull the story from Rebekah about the original family (or at least parts of it).

Michael and Esther immigrated from old Europe after a plague killed their child. Esther knew a powerful witch who told them of a land beyond the sea where the people were stronger, faster and healthier — a colony of werewolves.  They traveled there and found peace with their neighbors, settling in and giving birth to Klaus, Elijah, Rebekah, Heinrig and I am assuming more (just based on the coffins that Klaus is always toting around with him).

From our first view of this ancient area (Mystic Falls), Klaus and Elijah are sparring.  Klaus is taunting him playfully and even uses his blade to cut off Elijah’s belt.  It’s all good fun and laughs until Michael storms in and puts Klaus on his ass.  He has no patience for his fun loving, troublemaking son.  Esther turns away even though she admonished Michael to go gently.

The humans understood the werewolves monthly transformation and once a month they slept in the caves, protected by witches magic while the wolves went wild.  Until the night Klaus snuck out with his far too young a brother Heinrig.  They wanted to see the wolves.  Heinrig died.

Devastated, Esther begged the witch Annaria to bring him back, but the spirits refused.  Later, Ester and Michael planned to save all their children, but Annaria refused the plan for it had the makings of a plague.  It was up to Esther, alone.

Esther, of course, was the original witch.

Elena was shocked to learn that the original witch was their mother and that vampirism was meant to protect their children from death, not be a curse.  One night, Michael laced the children’s wine with blood.  After they all drank it, he drove his blade through each of them.  When they woke, in transition, he brought a human for them to drink from.  Interestingly, he shoved Klaus away, allowing Rebekah to drink first.

But Annaria was right, witches were nature’s guardians and vampires were nature’s abominations.  Nature struck back.  The spell used life from the immortal ashwood, so the flowers that grew at its base became poison to them and prevented their ability to compell others (vervaine),  the sun burned them until Esther crafted rings to protect them and they could not enter the homes of humans without invitation.

But the worst was the blood lust.  They couldn’t control their hunger and soon they began to kill.

Since the only thing that could kill them was the ashwood, they burned it to the ground and after Klaus’ first kill, his werewolf gene activated.  His mother bound his werewolf side and supposedly turned her back.

This is where Rebekah’s story broke from the tale told on the cave walls.  Klaus told her that Michael went insane with jealousy and anger when he learned that Klaus was not his son.  He killed half the werewolves and ripped Esther’s heart from her chest before disappearing in the wilderness.  But according to the caves, it was the hybrid Klaus who killed his mother.  Since Klaus has a history of being brutally vengeful when he doesn’t get his way, it’s not a hard leap to believe he killed his own mother. 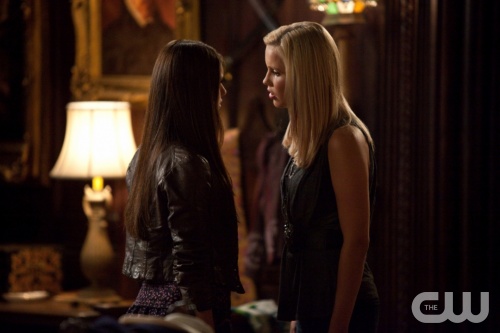 Chances are, based on Michael’s behavior towards Klaus, he always knew Klaus wasn’t his son.  His anger with Klaus isn’t over being a hybrid, it’s over the murder of Esther and the way he stole his siblings — chances are, he tried to kill Michael too.  Can’t wait to hear Michael’s side of the story.

At the end of the day, Rebekah is left to mourn the loss of her mother all over again.

The best moment of the whole episode, for me, came at the very end when Elena found Damon waiting for her on her bed.  It’s hardly the first time, but tonight it was different.  She was less impatient with him and when he invited her to take him to task for releasing Stefan, she didn’t.  Exhausted, she climbed into the bed and curled onto her side, with Damon rolling over to look at her.

It was a casual intimacy as they exchanged what happened during the day.  Damon told her they found Michael and that Stefan was on their side for now.  She admitted that she might have gotten Rebekah.  But she was tired and wanted to tell him the rest tomorrow.  He told her of course and Elena closed her eyes, and went to sleep.

It was by far, the most intimate moment this couple has ever shared.  Snugged away in bed with Damon watching over her, sharing their plans and being together.  Yes, I had a thrill.  It was a beautiful moment and it shows just how far they have come and just how much they have begun to rely on each other.

One more episode to go and how much do you want to bet all hell breaks loose?

I am a little sad about Rebekah, though.  I think she’s going to bite it in the next episode or two and she’s starting to grow on me.   What did you think?