Vampire Diaries Post Mortem: A View to a Kill & More

Turn Me On this Valentine’s Day

Kickstarter for A Fistful of Dreams

Oops, I didn’t do a Post Mortem last week, I knew I did one in my
head and I certainly talked about the episode, but with deadlines I just didn’t
get it done. So here’s a quick hit list about last week: 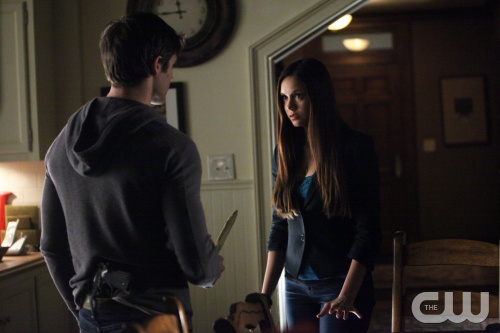 Damon summoned Elena to him, but Klaus through a wrench into it by turning an
entire town for Jeremy to kill. Unfortunately Kol has other plans—he really
doesn’t like the idea of raising Silas.
Point of Order: I knew Kol would compel Damon, but he had to drain
the hell out of him to get him to that point and even though he told Damon he
wouldn’t remember being compelled—he did. He fought the compulsion and he told
Jeremy to get away from him. He held himself back when he did confront him and
he let Jeremy shoot him.
Funniest scene ever when Damon wakes up after being shot in the
head. He is trying to save Jeremy’s life—even from himself.
Another interesting note, it’s violently important to Jeremy that
Damon like him for him and not just for Elena. I think Damon does—but only in
the sense that Jeremy is another younger brother for him to look after. Jeremy
could have killed Damon and he chose not, too. Those choices weren’t about
Elena. So kudos to Jeremy and Damon—they both miss Alaric and while neither can
be a replacement for the fallen vampire hunter, they are trying.
In other news, Bonnie is totally Professor Shane’s bitch. I can’t
stand Bonnie’s father and Liz is turning into a plot device, Caroline is
missing (still), Klaus and Stefan’s mutual whining is tiresome and Rebekah
isn’t interesting. Kol reminds me of a younger, more reckless Elijah and I
loved Elijah mention.
Oh and the guy biting off his own tongue? Ewww.
And Stefan goes to Rebekah for revenge sex. Too damn funny,
because Damon’s revenge sex with her worked with Elena, will Stefan’s? I don’t
care.
The episode concludes with Elena coming up with a plan—if Jeremy
kills Kol, it frees Damon and completes Jeremy’s map all at once.
A View to a Kill
Hands down, this is my favorite episode of the season—why? Because
the episode got so much right from Elena giving Jeremy and Matt hell about not
cleaning up to pointing out that they needed to put away the weapons before
Jeremy accidentally staked her to Klaus wanting Damon’s advice on how he got
Elena to forgive him.
Succinctly put, Damon pointed out that he was bad with a purpose.
He wasn’t a reckless douche.
Bingo J 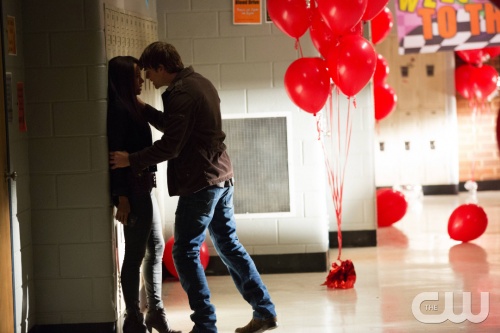 Mommy Issues
Kol goes after Bonnie at the school, but she expresses herself and
leaves him crumpled on the ground before getting away. Only, her Daddy takes
her cell phone and grounds her and apparently, called Mommy.  Hey look it’s Abby—seriously, I just don’t
care about this storyline. I used to like Bonnie, but somewhere along the way
between her judgy bits and her inability to see past her own prejudices and now
the fact that she’s Shane’s puppet—it’s just not doing it for me.

I did get a giggle out of Jeremy going to stake Abby—vampire
hunter boyfriend, vampire mother—not going to work out well for Bonnie. Course
she was able to distract him and sent him away. Oh and Elena’s alone with Kol?
Oh well, let me deal with my problems because Abby says no more helping Elena
Gilbert.
Stefan and Rebekah Dance
Nope. Still not caring. Stefan thinks Elena is nuts to want to
kill Kol. As he points out, the lunatics may bicker, but Klaus will flip his
lid if they kill his brother.
Umm…Stefan, you’re still alive and you participated in killing Fin
and setting up Klaus to kill his hybrids. Not really sure you’re the best to
give advice here. You also left unstable boy babysitting your brother. But
Stefan’s backbone folds and he agrees to Elena’s plan.
Damon’s in the Dark

Damon was benched for most of the episode, and he didn’t even try to leave—in
large part because he doesn’t want to kill Jeremy. He knows he’s compelled and
he misses Elena, but better to stay where he is—even if it is in Klaus’
company. Klaus taunted him about not being able to fight the compulsion the way
Stefan did.
May I point out that Damon did fight it? And if it had been Elena
he’d been compelled to kill we’re talking a whole different ball of wax? Apples
and oranges, but I digress.
Wonder Twin Powers Activate
At the core of this episode—the part that had me cheering—was the
relationship between Jeremy and Elena. These two siblings haven’t always been
on the same side of every issue—he didn’t like her erasing his memories and she
hates that he has to be a hunter and he hates that she’s a vampire, but at the
end of the day, they are the only family each has left and they are determined
to protect each other.
Elena doesn’t want the cure and hasn’t wanted it, but everyone
uses her as an excuse. What she wants is for Jeremy to be safe and out of the
pawn game with her. They know Kol is coming for them and they plan to have
Bonnie hold him while Jeremy kills him or at least daggers him.
When Kol shows up at the house, she sends Jeremy and Matt away
with their missions and tells Kol they will invite him in if he lets Jeremy
leave. He agrees and Jeremy invites him in before slipping out the back door.
Alone, Kol and Elena talk, make drinks and Kol knows Elena is
playing him, but he indulges her. Kol tells her he likes witches and he’s hung
out with several over they years, they all tell stories about Silas and why he
needs to stay locked up. See, Kol doesn’t want the world to end and he’s
determined to make sure it doesn’t.
The Moment of Truth
Jeremy is frustrated—Matt can’t find Rebekah’s dagger and Bonnie
is grounded—so he returns home. He finds Elena alone and is relieved, but Kol
was just waiting for the hunter to return. He kicks in the door and comes after
them—after informing Klaus that they set a trap for him and plan to kill him.
He’s going to rip the hunter’s arms off and kill Klaus’ blood bag just for
spite and then he’s coming for him.
What ensues next is a fun battle as Elena and Jeremy face off
against Kol. They can’t win in a direct confrontation, but they do a lot of
damage. When Kol leaves Elena pinned to a wall with a staircase rail through
her gut, he drags Jeremy downstairs to cut off his arms.
He promises to heal him with some blood as soon as he’s severed
them. Elena pulls herself off the rail and lays into Kol, again. Jeremy gets
himself free and hoses Kol down with vervain courtesy of the town water in the
taps. Elena pulls out the white oak stake from Kol’s pocket and tosses it to
Jeremy.
And bam.
Goodbye Kol.
The Gilberts saved themselves with Elena channeling her inner
Damon and yes, it felt very much like a Damon plan—because it worked.
Of course, Klaus is pretty pissed and he comes after them. He
declares he never wanted the cure, he wanted to destroy it and planned to kill
them all when it was done. But now he’ll just burn the house down.
Klaus in a Box
Bonnie shows up and she tells them to invite him in, once he’s
inside, she traps in him a holding spell in the living room (kind of like the
one that used to be on the tomb).  She’s
bought them a few days. They head to the Salvatores where Jeremy’s skin hurts
like hell when all of Kol’s sired line drops dead around the world.
I love that it never slowed Elena down that they might be
descended from Kol. They still don’t know. It was never about that. They may
assume they are descended from Klaus, but they don’t know.
Damon and Elena are reunited and it’s sweet when he tells her he’s
sorry he missed the fight—he would have been there if he could have been
without killing Jeremy and he’s proud of her. It’s all there in that moment. 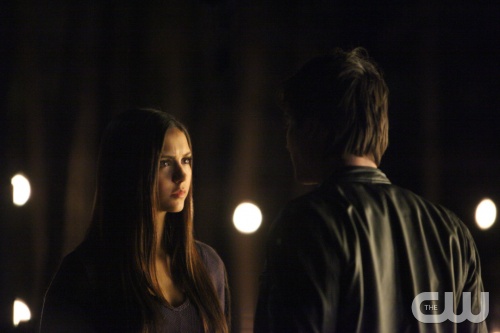 Stefan shows up and Damon gets to drop the revenge sex bomb,
making sure Elena knows that Stefan’s not as ‘alone’ as he’s pretending. Stefan
also didn’t dagger Rebekah.
Time Limit
It’s time to go find the cure, because they only have 4 days with
Klaus trapped and Rebekah it seems is on their side (yeah right) – so they’re
off to the Island next week. Shades of Lost anyone?
My only quibble—when Klaus raged at Elena for killing Kol, she
should have said “Yeah well, now you know how Jenna felt, bitch.”
But that’s just me.
I adored this. The Gilbert siblings saved themselves using
everything Damon taught them.
Yoda did good.
What did you think?
P.S. I’m totally waiting for the Dark Willow moment for Bonnie when Elena has to truly face off against her best friend.