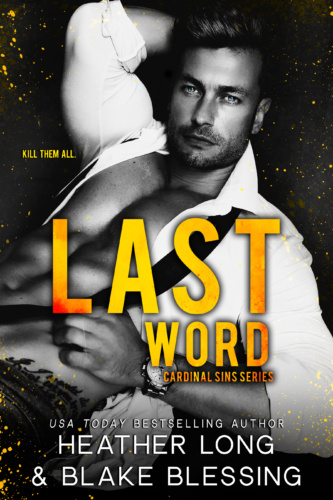 Book 4 in the Cardinal Sins Series

It was always me and Daddy, but now I have another family to protect.

From the day my father didn’t come home, my life changed irrevocably. From my earliest memories, I’d always known what I would do. Daddy hunted the monsters and when I was old enough, he let me help.

Under his tutelage, I trained, studied, and learned. I was his apprentice, his partner, and eventually, I grew up enough to strike out on my own. It was always the two of us. Sometimes we shared targets, but more often, he had his and I had mine.

I always thought we had no secrets, but my hunt uncovers more and more questions.

Then I met Rick, Fletcher, and eventually Cash. Rick shattered the loneliness around me and for him, I broke Daddy’s rules. Fletcher burrowed into my heart with his quirky mannerisms and vulnerability, and for him, I threw the rules out entirely. And Cash?

His relentless, damn near fearless pursuit turned everything I knew upside down all the while he filled in a hole in my defenses. For him, we’ve rewritten the rules entirely. They are my apprentices, my support, my team, and very quickly, they have become my partners in both life and business.

Most of all, they are mine.

I won’t stop hunting for those who took Daddy while I continue his work. But I won’t do it alone. And I won’t let anyone take Rick, Fletcher, or Cash from me.

Don’t touch what’s mine. They will fight for me and I will kill for them.

Book 4 in the Cardinal Sins Series

I smoothed a hand down my shirt to where it was tucked in my slacks as I climbed out of the car. Today was the day.

My first day as an official FBI agent.

I’d graduated college at the top of my class and after almost a year of rigorous testing and background checks, I had finally joined the Bureau. A sense of accomplishment settled on my shoulders as excitement filled my chest, knowing I’d soon be working my own cases.

If I’d expected any kind of praise from Pops, I would have been sorely disappointed. I almost snickered to myself. His nod when I was introduced to the team was good enough.

For my first day, Pops had snagged me to be his tagalong. And the team had agreed to allow him to help me get my feet wet as he checked in with some of his informants.

I was stoked. All my life I’d wanted to follow in Pops’ footsteps. Work the unsolvable cases. Save people. But most importantly, uncover hidden puzzle pieces to see the bigger picture.

It was all about the puzzles and the patterns.

“Who are we meeting this time?” I asked as we left the parking lot of the park and moved deeper under the trees. This park was a decent size for a small midwest state. Big shade trees provided some semblance of privacy.

People were scattered throughout the park running with their dogs, watching their children play, or lounging on a blanket having a late lunch.

Pops pointed to two benches situated caddy corner to each other. I sat down on the end closest to the other one, avoiding the white bird shit on one of the slats. I would wager the informant would take the other bench and I wanted to be in the thick of things.

“Here,” Pops said as he handed me a sub out of a sandwich bag. An Italian with extra seasoning and oil and vinegar. My mouth watered as I unwrapped it. Hopefully, he had some bottled waters in that bag to wash it down.

I had finished off half the sandwich when a man of medium-tall height distractedly walked our way. Dark hair, bright eyes, and decent if cheaper clothing all made the man less than remarkable. If you didn’t see the intelligence shining from his sharp eyes…

From the way Pops’ frame tightened on his approach, I knew this was our guy.

Except Pops grinned as the man took a seat next to me on the other bench.

Pops never smiled at anyone. I scratched my cheek as I studied my old man. He didn’t like most people—period. Hell, I barely thought he liked me some days.

The man nodded his greeting and pulled out his own homemade sandwich in a plastic baggie. “Morgan.” He took a bite of his sandwich and slowly chewed. His gaze flicked over me then moved back to Pops. Everything this man did seemed deliberate. Methodical. “Why did you ask me here and who is this?”

“This is my son, Cash. It’s his first day on the job.” He cleared his throat, then continued onto more important things. “I was put on a case. Out in West Virginia, four boys were found in an abandoned house. They’d been kidnapped, but when they were recovered, they were the only ones in the house.” Pops used one of the napkins from the bag to wipe crumbs from his mouth.

The other man paused in his eating as he watched Pops with a hard, unwavering stare. “I saw that on the news…You don’t have any leads?”

“Well,” Pops drawled. “That’s what I wanted to talk to you about. What do you know about a man called the Curator?”

Thad’s lips barely twitched before they flattened into a compressed line. “I’ve heard of him. He liked to collect children. Boys in particular, and offered services of providing an ‘around the world’ collection.” His top lip lifted in distaste. “I also heard he won’t be a problem anymore.”

Pops sighed, rubbing the furrow between his eyes as he digested that information. “Anything else you’d like to volunteer?”

And the shit of it was, Pops just nodded. This wasn’t the way informant relationships were supposed to go. When Pops explained it to me, he was very clear in the type of dialogue that happened.

“What about a man named Garrett Rutherford?” Thad asked.

“The stockbroker?” Pops’ eyebrows shot up.

“He’s wealthy, powerful, influential. All things you would expect of someone in that position…He’s also rumored to be a little rough in his proclivities, but I’ve never seen any concrete evidence. Why?” Now the hesitance entered Pops’ voice.

“No reason.” Thad balled up the baggie and stuffed it in his pocket. He didn’t need a napkin because no crumbs, condiments, or anything were on his face. The man seemed like a neat freak. “I need to run. I’ll let you know the next time I’m in your city. We can do this again.”

Thad didn’t even say goodbye. He just got up and walked away.

“Pops…” I started, as I watched this conundrum mosey out of the park like he wasn’t here to meet the FBI. “What the hell was that?”

“That was my best informant,” he sighed. “We might as well get going.” He stood, and when he saw I hadn’t followed, his eyes drooped in defeat. He knew I wasn’t going to leave without answers. “Let’s walk and I’ll fill you in.”

While we headed toward the car, Pops kept his voice low.

“There’s not a lot I can tell you about him. Only that he’s a staunch believer in his moral code and he has his ear firmly planted in the criminal underground. He has no allegiances or loyalty to the monsters of the world. That’s what makes him practically a unicorn. He doesn’t share information in exchange for a deal or anything so superficial. For him, he hates the monsters as much as we do.”

I’d never heard Pops describe the perps we tracked as monsters. But I couldn’t argue it fit.

“That seemed like you were his informant. Not the other way around.”

Pops chuckled under his breath. “Yeah, well, sometimes to stay in his good graces it works like that.”

“Hmm.” I could see that logic. Pops was, at the end of the day, one of the best agents in the field. I’d do well to follow his lead.